THE "WILL" TO PAINT

Born on March 16, 1980 in a small town of Transylvania.
Fascinated by different artistic languages, she began studying music, but then she discovered and realized that she loved painting and drawing even more.
She started in 1994 attending an artistic high school, she then studied and graduated in 2004 at University of Fine Arts.

THE "WILL" TO PAINT

Ribana Szutor’s painting does not need mediations or explanations, her painting is directly in contact with the sensibility of who looks at it. Her painting does not require judgments, at least for the time required by the eyes (and soul) to let fermenting emotions and feelings, impressions and artistic similarities from the time they met.
They seem many different images, for subject and style, but if the fist impression settles, you will soon notice that they all recall, beyond the common vertical “human size”, to an unique existential attitude. It is all about a choice of the soul, strongly felt, that is manifesting through the evident intention of “willing” to be an artist with painting, ready to restate the value of the painting, just keeping painting. As always it has been, on the other side, is about putting signs and colors on a surface, as probably as always will be, beyond all new representative techniques.
If you look back at the different artistic currents of the eighties and nineties, of the past century - the years beyond Ribana’s artistic formation represent her direct artistic archive - the first thing you will notice is the frequent use of the adjective “new”, new “wild” artists, a “new” figurative art, a “new” German and Austrian painting technique.

Under the light of the “novelty” appears all what deserves to be taken in consideration. But in a very short lapse of time from the “new” wilds there is now a new artistic way with a neogeometric program called “noegeo”. In any case, neofiguratives and neogeometrics, have not yet finished their expositions in the artistic galleries that establish the new artistic tendencies in New York, Colony, Paris, Vienna, London and Milan, that already the neoconceptists attract the attention of the artistic world. When something is proposed in springtime, it often reveals as already outdated in fall. Strange to say but the art critics are the first who complain if there is not something “new”. Even though they do not like that tendency where contemporary art obeys without opposing resistance to the fashion law. They think the same about the artists that are at the beginning of their career and have huge success, as stars of TV shows. 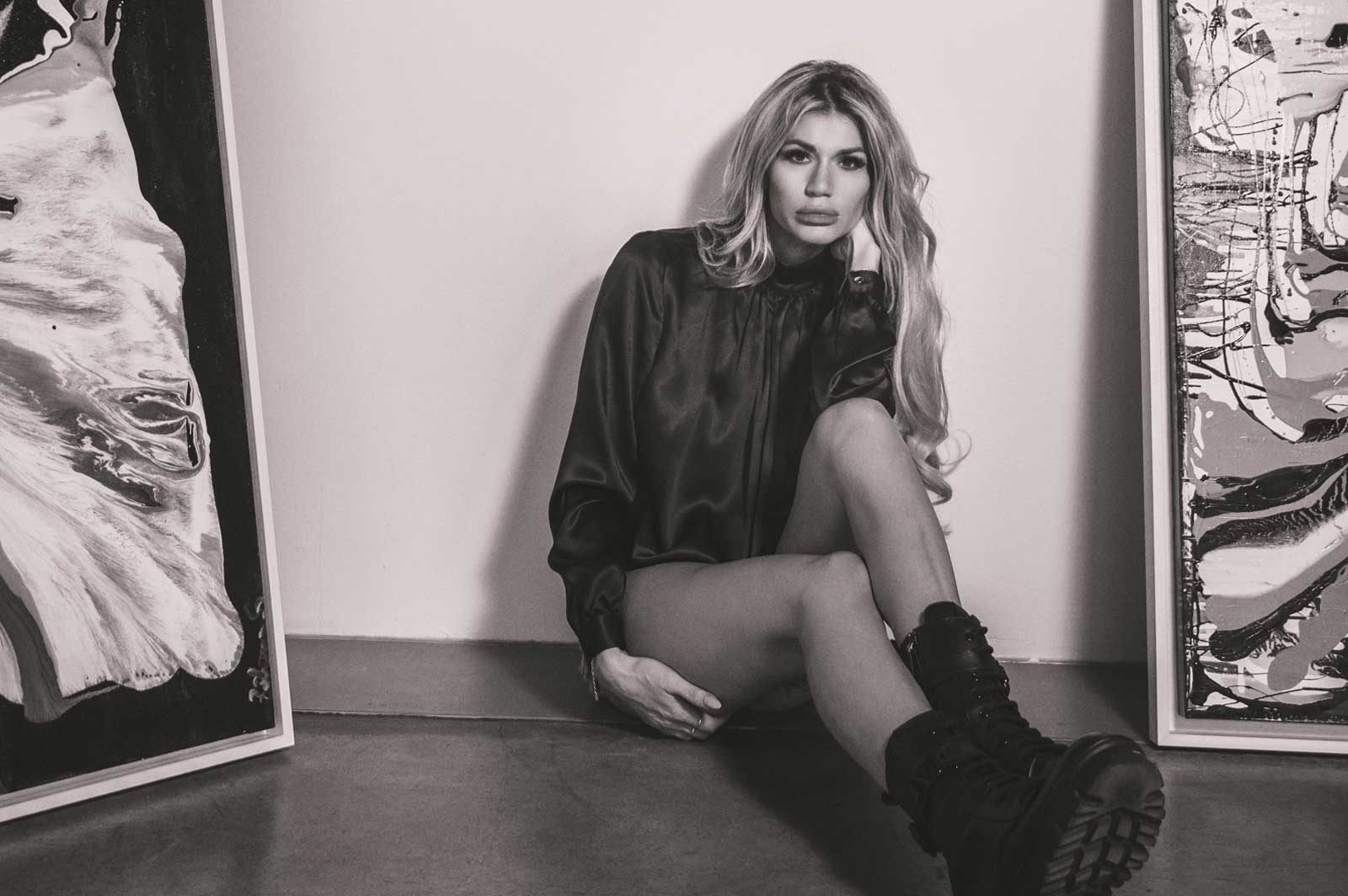 The inflated use of the “new” adjective in connection with the various artistic tendencies does not correspond any more to its full linguistic value. It never appears alone, but always as a prefix, connected to an already existing artistic tendency. The “new one” is not therefore so new, and it does not have to be. The abstract images, the floral elements, the stylized and evanescent bodies, the magnified faces are represented and narrated “again” by Ribana Szutor with unmistakable capacity (that seems to belong only to the children, to the crazy people and to the artists) to reinvent the things through the symbolic language of the form and the color.

It is about a symbolic language that strongly characterizes the way of interpreting the painting and the act itself. And those elements are easily identifiable: the pleasure in the free combination of the colors and in representing the forms, imaginative density, sense for the decorative effects, unconcern towards the encoded rules of the art, above all those the state of the art, an uninhibited use of stylistic techniques, apparently incompatible- from which is born the impression of an unaware stylistic contamination -, the carefree mixture of elements of the high and low art, the exhibition of her own artistic I, almost always in mediate way, a latent eroticism with almost no ties set by the conventions as forms of the artistic expression used, a playful style and the tendency to the evocative image.
A hidden romanticism also emerges, that in some cases grazes the sentimentalism but always surpassed the pleasure of the “will” to paint, the pleasure of the pure pictorial action. It is a pleasure that shines through a representation of signs and colors, but also of emotions and suggestions. It captures the heart, the mind, the senses of who looks at through a language that is able to create an inside dimension, a language that has the ability to individualize a path in an intimate world and make it visible through the universe of the signs and colors.

It is a path in witch abstraction and reality coexist in an irresistible vocation of representation. When the artist paints the invisible, the image asks to be dressed in colors and defined forms. She transforms the images of the quotidian (witch are abstract or figurative, but in any case always transfigured) through the magic of the chromatics. The colors are denied to the expectation, but they become the identity of everything. The chromatic narration is placed in an eternal present. When the path ends, the image is an extended echo, it preserves the silent, is increasing our ability to vision. The look of the mind and the look of the heart, are rejoined and involved in an only pictorial conception, and end up being vivified and renewed.

For any question or curiosity, do not hesitate to contact me.